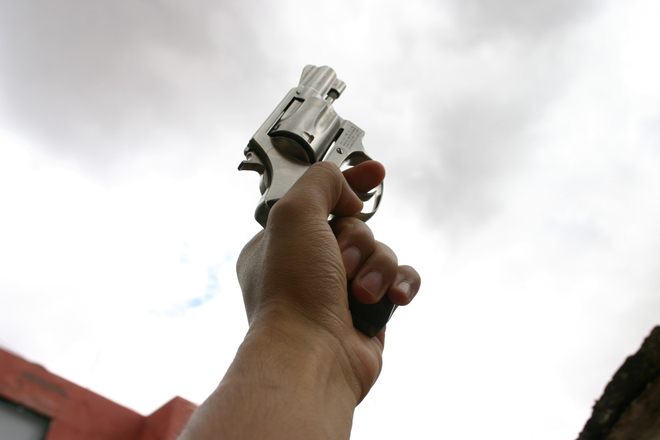 People in some cultures fire their guns in celebration. Celebratory gunfire, or aerial firing of firearms, is common in the countries of the Balkan region, the Middle East, Central Asia, and South Asia. Though not as widespread, it is also practiced in the U.S. and Puerto Rico during holidays such as New Year’s Eve.

What comes up must inevitably come down. Bullets fired into the air have no place to go but back down to where they started. This practice may seem fun and innocuous, but it has resulted in many cases of random deaths and injuries from stray bullets. The practice has also lead to property damage in the form of defaced roofs and shattered windows.

Although the velocity of a bullet fired into the air will be lower than its velocity when released from the muzzle of the gun, it is still forceful enough to kill or injure people it might hit on the way down. Bullets fired at angles will travel much faster than bullets fired vertically. This is because of the angular ballistic trajectory that results in less tumbling motion for the bullet, making it travel faster in its downward course. As a result, greater damage to the people and property below could follow.

Fighters in war zones often celebrate by firing their guns into the air. Groups that traditionally live with firearms celebrate occasions in the same way – firing their guns into the air. The problem, however, is that during celebrations, many people are outdoors and could be potential targets. Additionally, they are in the mode to celebrate and are not on their guard as they would be in war time. The U.S. Centers for Disease Control and Prevention reported that most cases of gunfire-related injuries affect the head, feet, and shoulders of the victims.

Death, injuries, and property damage can be prevented by abandoning the tradition of celebratory gunfire. It is illegal in most countries, but people still continue the practice. The best preventive measure, therefore, is educating people, especially gun owners, on the proper use of guns and letting them know that celebratory gunfire often backfires in serious ways.